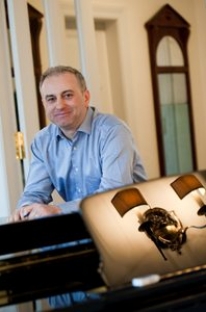 Born in Mersin in 1967, the Turkish composer Ali Özkan Manav first studied at the State Conservatory Mimar Sinan in Istanbul, later with Marjorie Merryman and Lukas Foss as the University of Boston. Since 1991 he has taught composition at the Conservatory Mimar Sinan. Ali Özkan Manav has won several prizes in Germany for his works: Sforzati was premiered in the series Musica viva of the Bavarian Radio in 1998, Portamento lento at the Beethovenfest Bonn in 2002. His compositions consciously play with dualistic structures, which may be historical, but may also be found in sound colours and spatial experiences.

We're not around right now. But you can send us an email and we'll get back to you, asap.